On August 1, Google confirmed the release of a broad core algorithm update. Since the announcement, the update is being dubbed the “Medic Update” because of its apparent emphasis on the health and medical spaces. However, according to Google liaison Danny Sullivan, this is a “global” change that doesn’t single out any specific vertical.

Moz offered a look at the categories seeing the most impact (below). While “Health” was at the top, it wasn’t singularly affected. According to Moz’s Dr. Peter J. Meyers, “this isn’t a situation where one category was blasted and the rest were left untouched.” 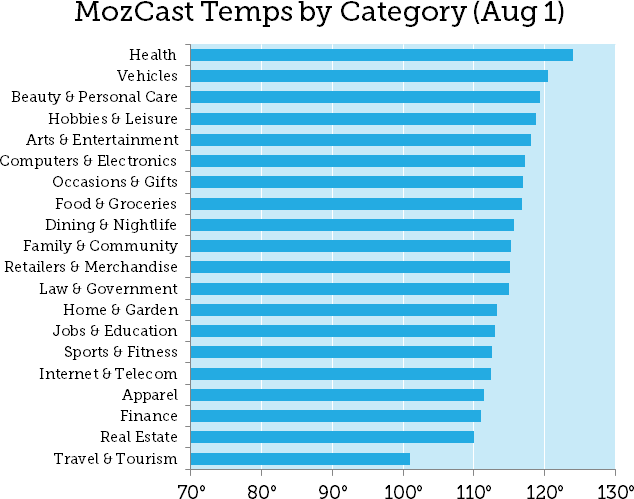 As expected, the SEO space is buzzing with perspectives, analysis and interesting insights tracking this shift. Here are some noteworthy views of the update:

From Google’s perspective, generally these changes aren’t intended to punish pages but rather boost those that deserve it. According to a tweet back in March from @GoogleSearchLiaison:

“As with any update, some sites may note drops or gains. There’s nothing wrong with pages that may now perform less well. Instead, it’s that changes to our systems are benefiting pages that were previously under-rewarded….”

Joe Morsello (@joemorsello) is the owner of Rithm Marketing, a digital marketing agency based in Metro Detroit. Formerly Joe was the director of marketing at the Local Search Association.